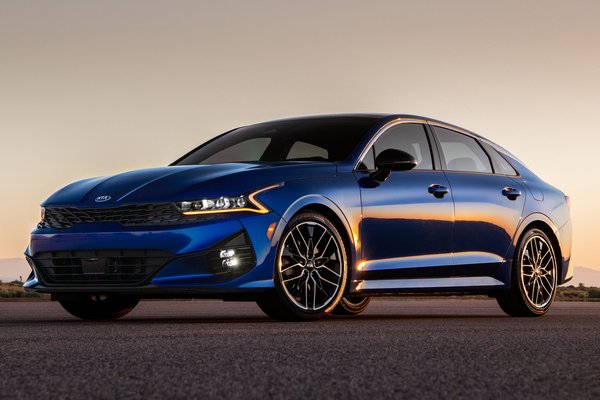 For 2021 Kia's all-new midsize sedan adopts a new (to the US) K5 nameplate replacing the long-running Optima name. Compared to the Optima, the K5 is about 2 in longer in wheelbase and overall length. The K5 is slightly smaller on the inside, losing about 3 cu-ft. of passenger volume. All but the top sport models equip a 180-bhp 1.6l turbo four mated to an eight-speed automatic whereas the K5 GT equips a larger 290 horsepower 2.5l turbo four and dual clutch 8-speed. AWD is optional on all but the GT trim level.

Nearly a decade after the 2011 Kia Optima paved the way for one of the auto industry's most significant growth and achievement stories, Kia Motors America (KMA) is resetting expectations once again with the reveal of the all-new K5 mid-size sedan. Representing one of the biggest leaps forward between generations in recent automotive history, the K5 celebrates this bold new chapter in Kia's story with an equally bold name to emphasize the mid-size sedan's revolutionary design,...Read.