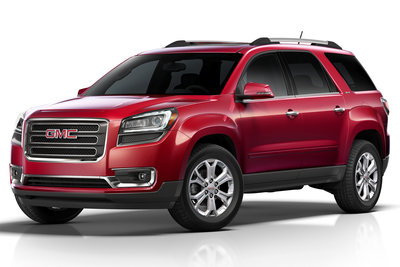 The GMC Acadia is one of several closely related crossover vehicles for General Motors. Along with the Chevrolet Traverse and Buick Enclave, the Acadia is one answer to those customers who are moving out of mid and large SUVs. The Acadia complements the body-on-frame Yukon in the GMC lineup. Both offer 3 rows of seating and have a similarly sized footprint, but the Acadia is a unibody vehicle offered in FWD and AWD versions. All models are powered by an all-aluminum 3.6L V6 with a six-speed automatic transmission. Unlike the truck-based Yukon, the Acadia features a fully independent suspension. GMC considers the Pilot, Durango, and Explorer as competitors. The Acadia is foot longer than the Honda Pilot and several inches longer than the Ford Explorer. The Acadia is compelling alternative for those looking to trade in their Yukon. Customers who find the GMC image and 3-row seating important but don't need the towing capability will find the superior fuel economy and road manners of the Acadia a welcome bonus.

General Motors updated the GMC Acadia for 2013 with new front-end styling, rear-end styling and a new interior. The new styling is identified by a more vertical front end with a more prominent grille. In the rear, the side glass appears to wrap around to the hatch. The 2013 model is virtually identical in exterior and interior dimensions to the 2012. The 3.6l V6 carries over producing 288-bhp.