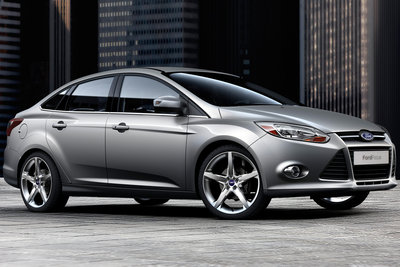 Compact cars are one of the most hotly contested segments in the industry. It takes a combination of style, value and fuel economy to succeed. Redesigned for 2012, the Ford Focus addresses all three with a range of models from the basic S to the high-end Titanium. A standard 160-bhp, 2.0l four cylinder engine is one of the most powerful engines in the segment, yet maintains a respectable EPA rating of 28 MPG city, 38 MPG highway (6-speed AT). The Focus is slightly smaller than some competitive models but splits the difference in size between the smaller Ford Fiesta, and the larger Ford Fusion. Two body styles are available: a sedan and a five-door hatchback. The basic S and SE have low starting prices, but include common cost cutting items like rear drum brakes or steel wheels with wheel covers. At about $21,000, the Focus SE appearance package addresses both shortcomings nearly matching the price of similarly equipped models from other manufacturers.