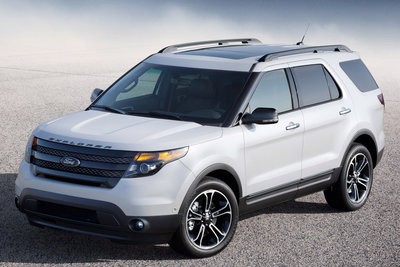 The Ford Explorer is a hall-of-fame vehicle. The original Explorer helped to define the SUV segment and for years sold in numbers that no modern SUV or crossover could duplicate. In 2011, Ford reinvented the Explorer. Like all but the largest SUVs, the Explorer is now a unibody vehicle with a FWD-biased drive system. The new Explorer is longer and wider than before with a more spacious interior for seven passengers. By comparison, the Honda Pilot is slightly smaller, but the Chevrolet Traverse is slightly larger. Under the hood, most models equip a 290-bhp 3.5l V6 that has more power than competitive V6s and nearly matches the output of the prior generation's V8. Ford also equips the Explorer with an unusual 2.0l turbocharged four-cylinder (FWD only) promising increased fuel economy. Ford offers the Explorer in three trim levels ranging from about $30,000 to well over $40,000, ensuring that there is a model for every taste and budget.