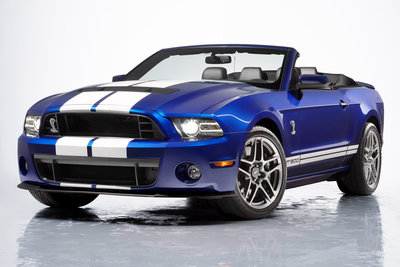 The Ford Mustang is instantly recognizable as an American icon. When introduced in 2005, the latest iteration intended to evoke the classic styling of the Mustangs from the late 1960's; however, a significant update in 2010 resulted in a sleeker, more modern design. Base Mustangs now equip a new 3.7l V6 with more power than many of Mustang's historic V8 models. The performance oriented GT model now equips an updated version of the legendary 5.0l V8 rated at 420-bhp. Both engines are mated to a six-speed manual or automatic transmission. Convertible models retain the coupe's four-passenger seating, adding a power-operated cloth top for open air driving. With sleek styling and powerful, yet fuel-efficient engines, the Mustang is far from being a throwback pony car.

The 2013 Mustang wears updated front-end styling. Highlights of the new styling include a larger grille opening and functional heat extractors on the hood. HID headlamps are now standard on the Mustang. LED lighting accents have been added to both the headlamps and taillamps. Power on GT models increases to 420-bhp. The ultimate Mustang, the Shelby GT500 now includes a new supercharged 5.8l V8 engine rated at 650-bhp and 600 lb-ft. of torque. Ford claims a top speed in excess of 200 mph.