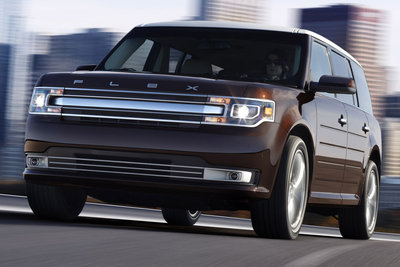 The Flex is a purpose built crossover vehicle with three rows of seating and unique appearance guaranteed to draw stares. The Flex defies categorization and has few direct peers in the marketplace. With a height of just under 68 inches the Flex is shorter than a minivan, but significantly taller than other wagons like the Toyota Venza. The long body of the Flex is wrapped around a conventional three-row interior with generous accommodations for occupants in the first two rows of seats. The Flex falls short of the three row utility of a minivan with a smaller third row seat, and substantially less cargo area behind it. The long bulky rear passenger doors could make getting in and out of the rear seat difficult in parking lots. Ford's latest Explorer nearly matches utility of the Flex in a more conventional SUV body style. The Flex is offered in SE, SEL, and Limited trim levels. A 3.5L V6 and six-speed automatic transmission are standard on all trim levels, but a powerful turbocharged 3.5l V6 engine is available on the top model. Pricing starts at around $30,000, but climbs quickly to nearly $50,000.

Ford made a number of modifications to the Flex for 2013. Most noticeable is the revised front end styling. The standard 3.5l V6 engine produces sees an increase in horsepower and fuel efficiency. Ford's SYNC connectivity technology becomes standard.