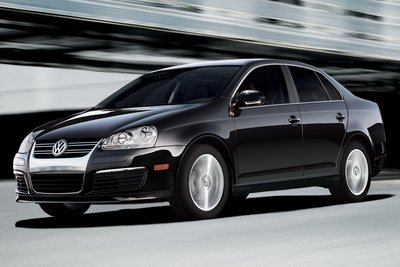 The Jetta is Volkswagen's compact sedan. The exterior styling is rounded and features a prominent chromed front grille and rounded headlights. A cleanly styled interior features a number of improvements in ergonomics. The standard engine is a 170hp, 2.5L inline 5-cylinder engine with a 5-speed manual and optional six-speed automatic transmission. A 2.0L turbocharged model is offered for more performance. The Jetta range also includes a high-mileage diesel model. The Jetta TDI is rated at an impressive 41 mpg on the highway. The Jetta is a competent car, but at the upper end of the model range, the roomier but similarly styled Passat becomes a very attractive alternative.