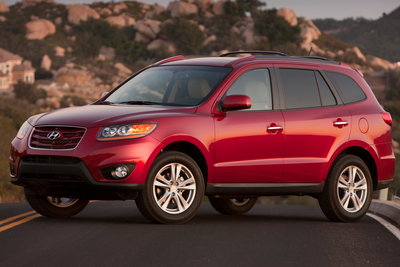 The Santa Fe is a competent and efficient SUV from Hyundai. Loosely based on the Sonata, the Santa Fe has car-like driving manners with the ride height and capabilities of a mid-sized SUV. The interior is tastefully styled with ample accommodations for 5 passengers (seven passenger seating is no longer offered) with a generous cargo area. The Santa Fe is offered in front-wheel-drive and all-wheel-drive with a choice of either a four-cylinder or a V6 engine. Three trim levels are offered ranging from the well-equipped base GLS model to the Limited model with leather-trimmed interior.

The Santa Fe receives some mid-cycle enhancements for 2010. Two new engines power the model this year. A 2.4l four-cylinder engine replaces the smaller 2.7l V6 as the base engine, whereas a 3.5L V6 is now the sole V6 engine. Both engines have increased fuel economy and the new V6 offers a significant jump in power. Six-speed transmissions are now standard on all models. Exterior styling changes include a new grille, front fascia, wheels and taillights. Interior changes are limited to updated seat materials and changes to standard equipment. The third-row seating option has been discontinued.