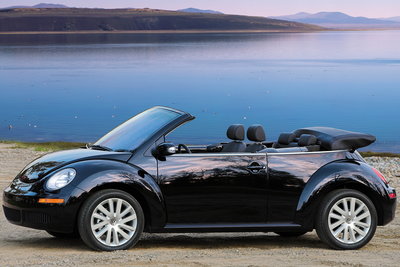 It's hard to approach the status of the Beetle. Only a couple of cars on the road have similar lifetime sales numbers and few have the instantly recognizable shape of the Beetle. The New Beetle arrived in 1998 as a modern car based on the Golf platform with modern technology and a fairly high price. In 2003, the convertible version appeared offering a power-operated soft top that retained the classic styling while down. Like the fixed-roof Beetle, the convertible is only available with the 2.5L inline 5-cylinder engine. A six-speed automatic is relatively rare in this class of car. Priced at about $26,000, the New Beetle convertible is one of a kind.