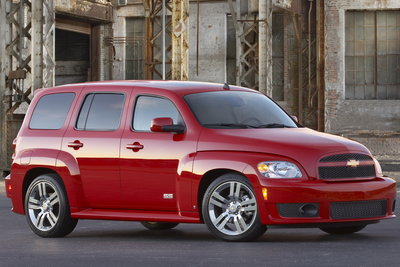 With styling meant to evoke memories of the 1949 Suburban, Chevy tries its hand at the winning formula of the PT cruiser. The HHR is a compact utility vehicle based on the same front-wheel drive platform as the Chevy Cobalt. The interior features fold-flat second row and front passenger seating for cargo hauling flexibilty. Two engines are offered: a 149hp 2.2L I4 and a 175hp 2.4L I4. Both engines are available with either a 5-speed manual or 4-speed automatic transmission.

Horsepower has increased in the base engine from 149-bhp to 155-bhp. Fuel economy is also improved. Both 2.2L and 2.4L four-cylinder engines can now run on E85. A new SS performance package features Brembo brakes and a limited-slip differential.