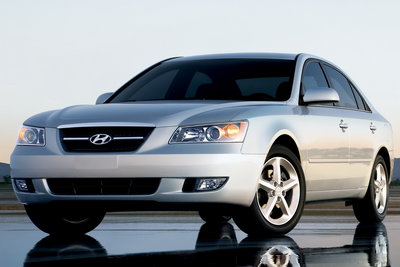 The Hyundai Sonata has become an increasingly viable alternative for many mid-sized sedan shoppers. In recent years, quality awards and healthy warranties have added to the already strong price value that Hyundai offered. The Sonata is Hyundai's mainstream sedan offering and it is now made in America. The FWD sedan is offered with either a 160hp four-cylinder engine, or a 234hp V6. The four cylinder engine is offered with a choice of 5-speed manual, or 4-speed automatic transmission. The V6 is only offered with a 5-speed automatic. Sonata has grown enough in size to be classified as a large car by the EPA. The increased room and standard safety features like stability control and side curtain airbags translate in to a solid offering.

The 2.4l four-cylinder engine is now available in the SE and Limited trim levels.