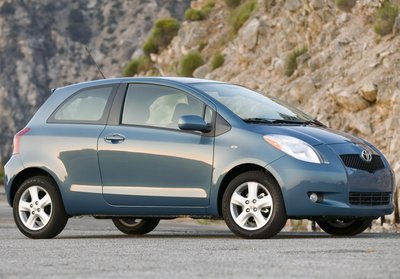 The Toyota Yaris replaces the ECHO as the entry-level model for the brand. The Yaris has been sold in other markets; however, this is the first model that will also be sold in the US market as well. Offered in 3-door hatchback and 4-door sedan (shown) forms, all Yaris models are powered by a 106hp, 1.5L 4-cylinder engine. The FWD subcompact is available with either a 5-speed manual and 4-speed automatic transmission. While offering relatively attractive styling and roominess, the main selling point for the Yaris is fuel economy with an estimated EPA rating of 34 city and 40 highway (MT model). Features are relatively sparse on the base model, but most common features can be added with optional convenience, power and appearance packages.

All-new entry-level 3-door model replaces the ECHO. The 2007 model is the first time the Yaris has been sold in the US market. Power is provided by a 106hp, 1.5L 4-cylinder engine. A five-speed manual is standard, a four-speed automatic is optional. The new platform will serve as a basis for other new vehicles including new Scions.