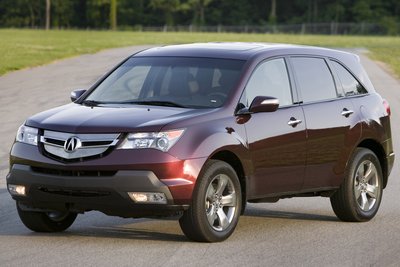 The MDX has been a popular and extremely competent SUV since its introduction in 2001. With the introduction of the second generation MDX in 2007, Acura dialed up the intensity significantly. Under the hood, all versions of the MDX feature a 300 hp, 3.7L V6 engine. Although many competitors offer V8 engines, the power output of the MDX V6 bests all other V6 engines in the segment, nearly equaling the output of a V8. Acura's Super-Handling All-Wheel Drive(TM) (SH-AWD(TM)) system is standard. A five-speed automatic is the only offered transmission. An available Technology package adds a satellite-linked navigation system and a 410-watt premium surround-sound audio system among other features. The optional Sport package adds an active damping system, unique interior trim and xenon HID lighting. The Entertainment package adds a rear-seat DVD entertainment system and heated rear seats. The MDX provides a luxury car feel with excellent ride, maneuverability, and a cabin that is roomy and comfortable. With Honda's reliability and high resale values, the MDX is an all-around safe bet.

The MDX is all-new for 2007. The new model is larger and more powerful than the model it replaces, yet the curb weight and fuel economy remain roughly the same. The MDX features a 300 hp, 3,7L SOHC V6 engine and 5-speed automatic. The drivetrain features standard all-wheel-drive with Acura's Super-Handling All-Wheel Drive(TM) (SH-AWD(TM)) system. P255/55R18 tires are standard with 19-inch wheels and tires optional. The aggressive new styling on the exterior includes a unique grille design that appears to be a reversed version of the Acura signature grille. HID low-beam headlamps and LED tail lamps contribute to the aggressive look of the new model. Inside, the MDX retains three rows of seating for up to seven passengers; however, the emphasis is on comfort for the front two rows of seats.