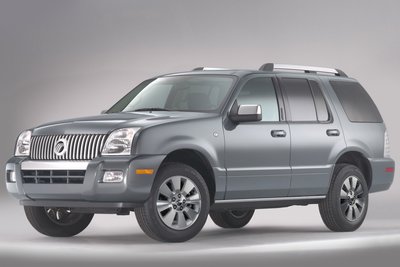 Identifiable by its its waterfall grille, aluminum-finish trim, and funky taillights the Mountaineer is an Explorer with more overt styling. This mid-sized SUV is available in rear-wheel-drive and all-wheel-drive. Engine choices include a 210hp V6 mated to a 5-speed automatic and a 292hp V8 with six-speed automatic. The six-speed automatic is somewhat uncommon in this segment. The Mountaineer offers some other standout features like integrated power-operated running boards, and power-operated fold-flat 3rd row seats. For those concerned with safety, Mountaineer offers a number of standard safety features. A standard roll-stability control system aims to keep the SUV body from tipping over in extreme maneuvers.

Moutaineer has received numerous improvements for the 2006 model year. Visually, the front and rear have been tweaked to match an evolving Mercury sense of style. Power-operated running boards hide in the rocker panels until needed. The interior has been updated with a new instrument panel, center stack, door panels and seats. Mechanical changes include a revised front and rear suspension. An all-new 4.6L V8 engine is coupled to a six-speed automatic replaces the V8 powertrain in last years model