The Lexus IS has always been the outlier in the brand's lineup. A rear-drive sport sedan from Lexus seemed out of character for a brand associated with plush, serene luxury. Yet the IS played its role of attracting customers intending to buy a BMW, instead of a Lexus. In its third iteration, Lexus has expanded the model range by offering all-wheel drive in the IS350.

Our tested IS350 was painted Ultra White with a dark grey and red two-tone interior. Getting into the IS350, we immediately appreciated the superbly supportive driver's seat. Perforated red leather upholstery and matching door trim contrasts with the grey hues on the dashboard and console. The sculpted bolsters provide excellent lateral support. Larger occupants may find the seats overly confining, but the IS targets younger, athletic customers. Rear seats are also supportive for two occupants, but the center position is best for short trips only. Legroom in back is not especially abundant, but the new IS is more spacious than its cramped predecessor.

A fat leather-wrapped steering wheel faces the driver, with paddles behind the wheel for the 8-speed automatic. An electronic gauge cluster displays a simulated analog tachometer surrounding a digital speedometer. Bar graphs on either side of the tachometer show coolant temperature and fuel level. Alternatively, the display can be configured to monitor fuel consumption, audio, tire pressure, or other vehicle systems. A 7-inch diagonal display at the top of the center stack shows navigation, audio, and other vehicle data. Under the center vents and analog clock is the climate control system and the audiophile-grade Mark Levinson audio system. A USB audio input is hidden within the center console bin. Lexus adopted clearly labeled buttons and knobs for commonly used audio and ventilation controls. Unlike most other manufacturers, Lexus uses a joystick controller to access the Entune infotainment system display. A touchscreen is more intuitive for customers accustomed to smartphones and tablets, but the center console-mounted joystick is certainly easily accessible. Dual cupholders are located on the center console, along with smaller cupholders in the front door pockets.

Lexus allows the driver to customize powertrain and suspension damping via "drive modes" selectable via a rotary knob on the center console. The default "Normal" setting can be overridden by turning the knob to the "Sport" or "Sport+" modes, which sharpen throttle response and transmission shifts, along with firming up the dampers. Selecting "Sport" locks out the top (8th) gear, and "Sport+" holds the selected gear ratio without upshifting. Alternatively, the "Eco" mode dampens throttle response, making the IS seems sluggish. A "Snow" mode is available, but swapping in winter tires would be advisable if driving in snow. Unsurprisingly, we preferred the sport settings most of the time.

The AA81E 8-speed automatic distinguishes the rear-drive IS350 from the other IS models, which are equipped with 6-speed automatics. The 8-speed reserves its top two ratio as overdrive (0.824:1 and 0.685:1), with sixth as direct drive. The other five ratios are closely spaced, especially third (1.863:1) through fifth (1.231:1). The wide ratio spread from the eight gears allows a tall 3.133:1 axle ratio, without compromising performance or fuel consumption.

The IS350 carries over the 2GR-FSE 3.5L V-6 installed in the previous-generation sedan. Power and torque ratings remain identical: 306-bhp @ 6,400 RPM and 277 lb.-ft. @ 4,800 RPM. The all-aluminum DOHC six uses both direct and port fuel injection along with dual continuous variable valve-timing. Redline is a conservative 6,600 RPM. Compression ratio is a relatively high 11.8:1, so the IS requires 91-octane premium fuel.

The 3.5L V-6 and 8-speed automatic powertrain gets an EPA mileage rating of 19/28 MPG (city/hwy.), losing just a couple of MPG compared to the IS250 and 6-speed automatic. Opting for the IS350 AWD nets a two MPG highway reduction, but city fuel consumption remains identical. We averaged just over 21 MPG in mixed urban and highway driving, but the best fuel consumption we achieved was about 24 MPG. Most of our driving was in "Sport" mode, so selecting the "Normal" or "Eco", combined with a lighter throttle input should yield improved mileage. According the Lexus, the RWD IS350 sprints from 0-60 MPH in 5.6 seconds (5.7 seconds with AWD) and crosses the quarter mile in 13.8 seconds (14.0 seconds with AWD). Top speed for the RWD IS350 is limited to 143 MPH, but is reduced to only 131 MPH with AWD.

Lexus engineers adopted the classic double wishbone layout with coil springs, dampers, and stabilizer bar for the front suspension. At the rear is a multi-link setup with coil springs, dampers, and a stabilizer bar. Standard 17-inch alloy wheels can be upsized to optional 18-inch alloys (F Sport). Bridgestone Turanza ER33 summer tires: 225/40R18 (front) and 255/35R18 (rear), are included with the F Sport package. Adaptive Variable Suspension (AVS) is included with the F Sport package, but only on the IS350 RWD. Brakes are ventilated discs: 13.15" diameter (front) and 12.20" diameter (rear). ABS, Vehicle Stability Control (VSC) are standard, along with Vehicle Dynamic Integrated Management (VDIM). Rack-and-pinion steering with electric assist is standard; variable gear ratio steering (VGRS) is optional. Curb weight is a reasonable 3,593 lbs. for the RWD IS350; AWD adds another 144 lbs. Unsurprisingly, the RWD IS250 is the lightest model at 3,461 lbs.

A few miles in the IS350 quickly reveals that this Lexus is a serious challenger to the BMW 3-Series. Steering inputs are direct, and the chassis reacts without hesitation. Although the steering is electrically-assisted, effort builds naturally and road textures are readily felt through the wheel. Throw the IS into a curve and it grips the road like few other sport sedan. Body roll is minimal, yet the chassis engineers managed to maintain admirable compliance over bumps and potholes. Considering the low profile tires, the impressive ride comfort is even more remarkable. Braking performance is superb: mashing the aluminum pedal results in massive fade-free deceleration at any reasonable speed. A firm and progressive pedal inspires confidence.

The V-6 responds linearly to throttle inputs, aided by the 8-speed gearbox. Even at full throttle, the V-6 emits a distant rumble, but in typical Lexus manner never becomes obtrusive. Speed builds rapidly and the IS will cruise effortlessly at 90 MPH or higher. At speed, the IS350 is rock solid, requiring minor steering correction to maintain course. Wind noise is subdued, but tire hiss is noticeable on concrete surfaces, but declines significantly on asphalt. With narrow ratio gaps, the automatic shifts seamlessly through the gears. We did notice that when cold, shift quality is not as smooth, but this disappears within a few minutes as the transmission warms up. Although the paddle shifters are convenient, we seldom needed to select gears manually.

The IS350 has evolved into a top tier sports sedan that can take on its German competition with no excuses. More spacious than its predecessor, the IS offers competitive power and superb chassis tuning, combined with Lexus refinement. Brand-conscious customers will likely prefer the BMW 335i, but the IS350 is definitely worth considering for those who are unbiased enough to consider alternatives. 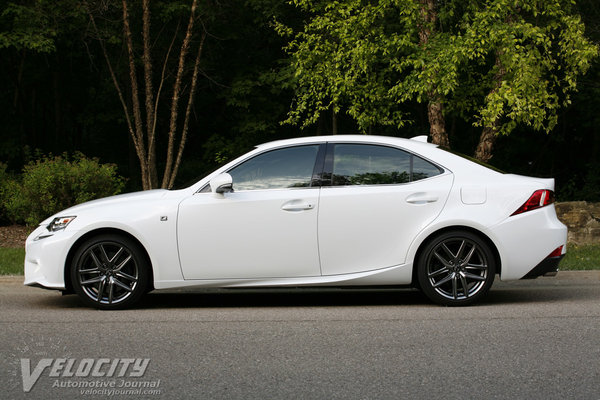 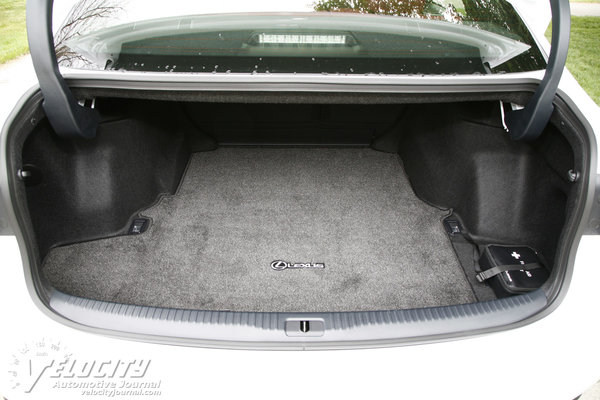 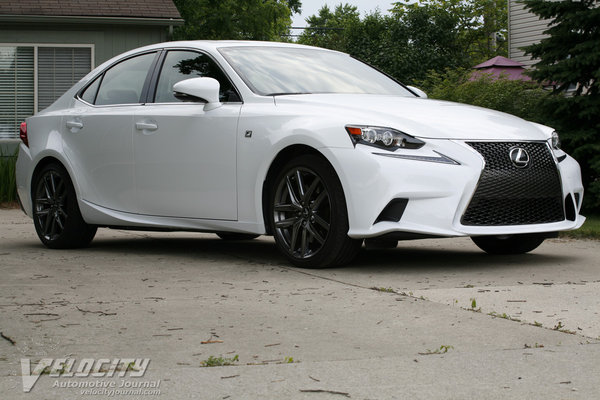 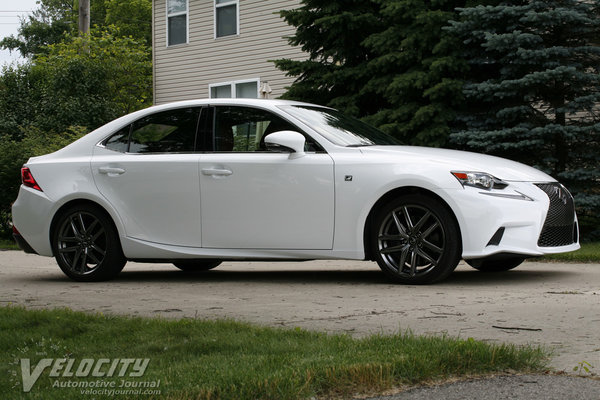 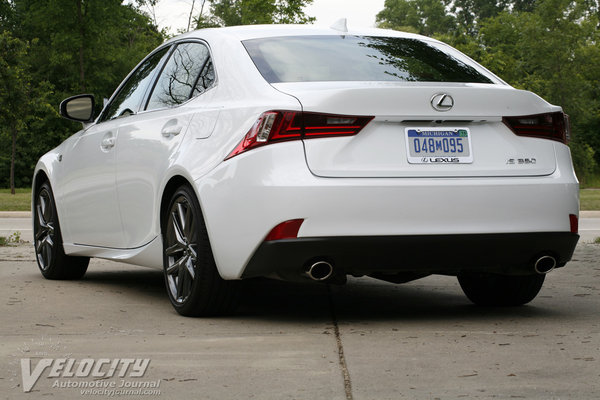 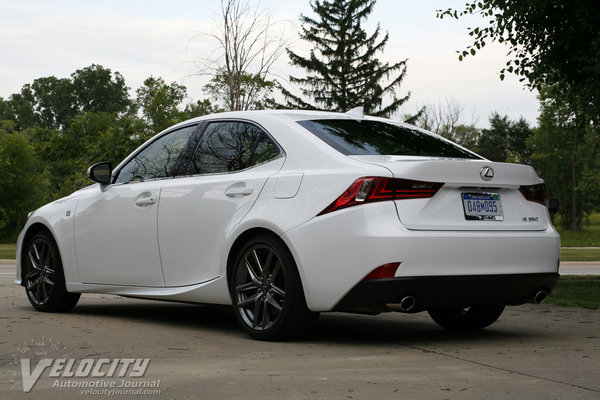 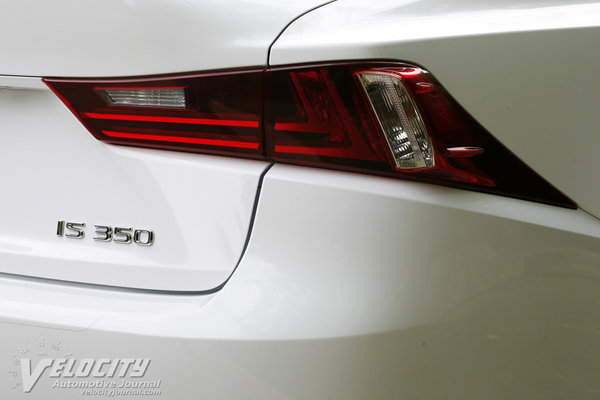 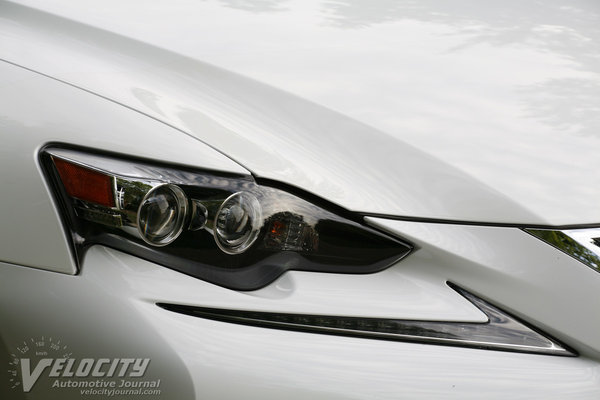 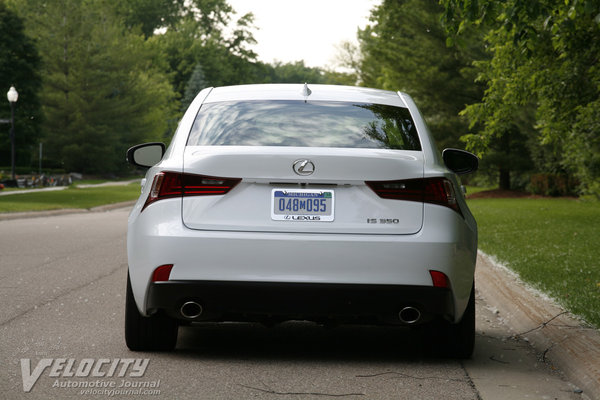 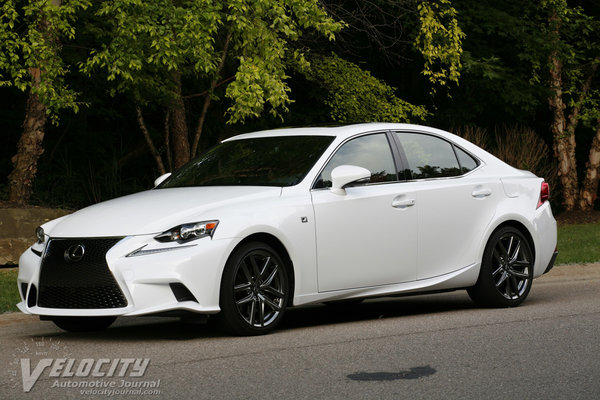 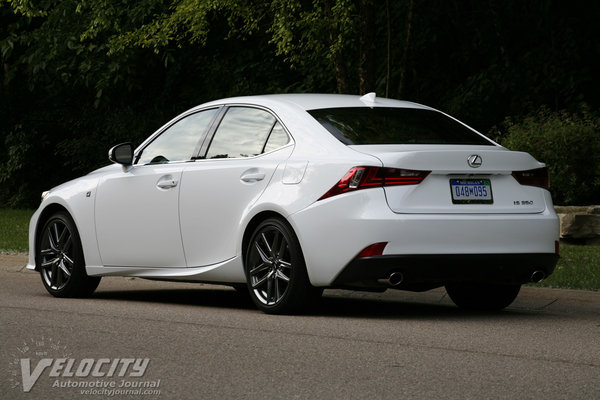 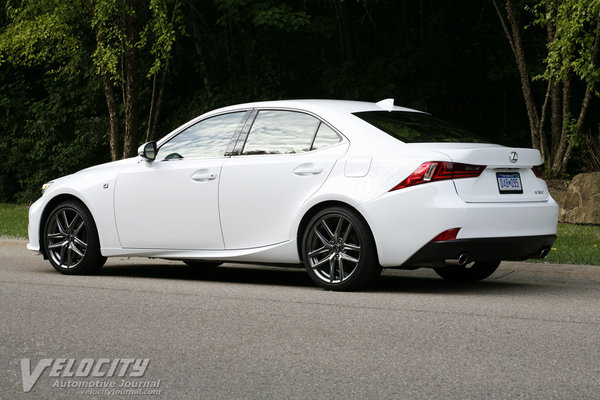 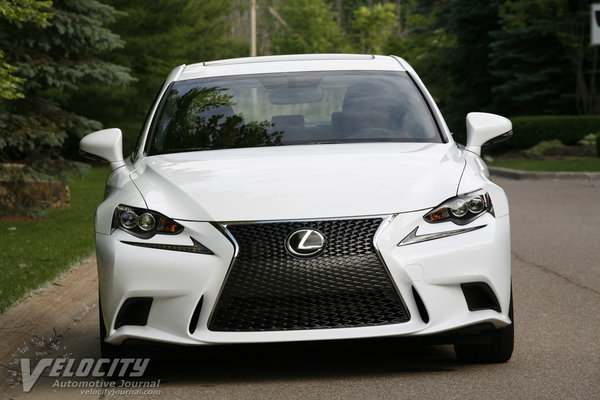 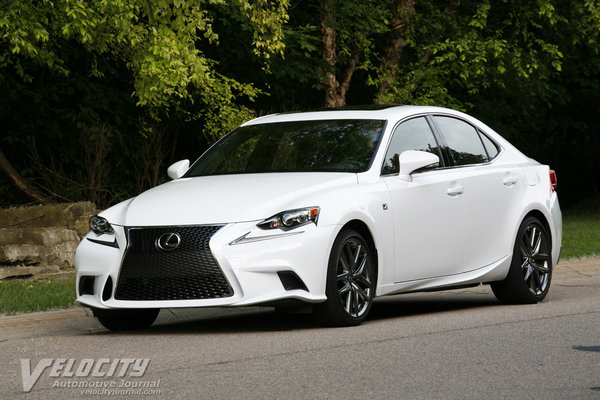 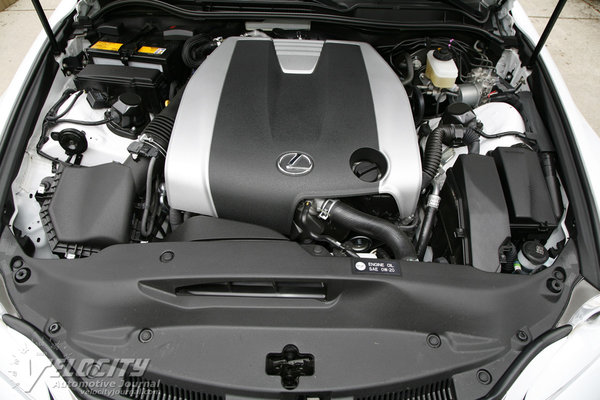 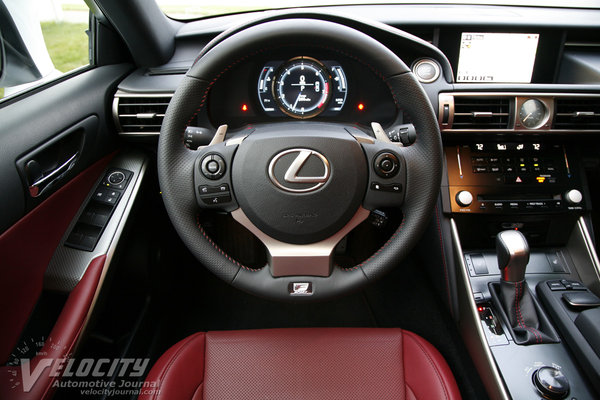 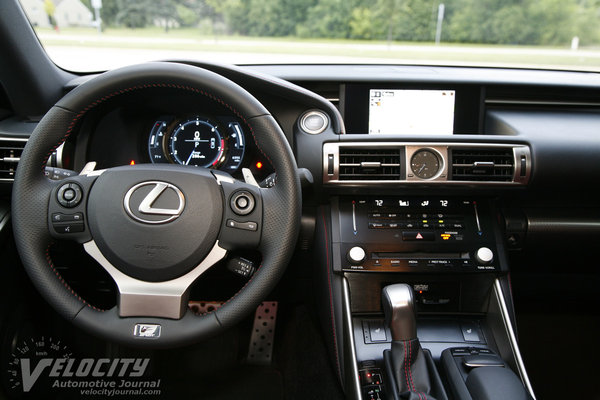 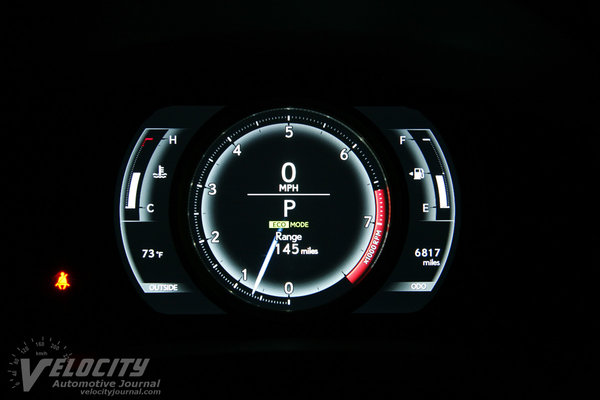 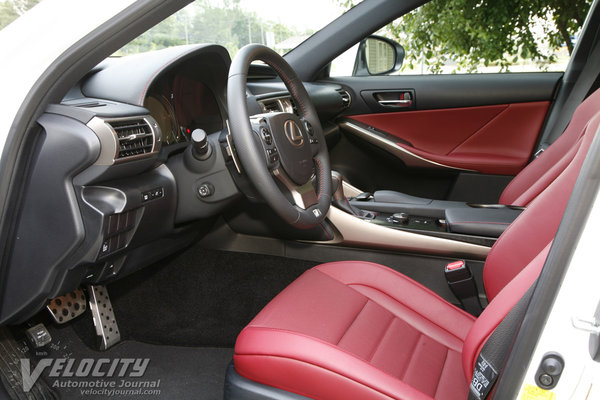 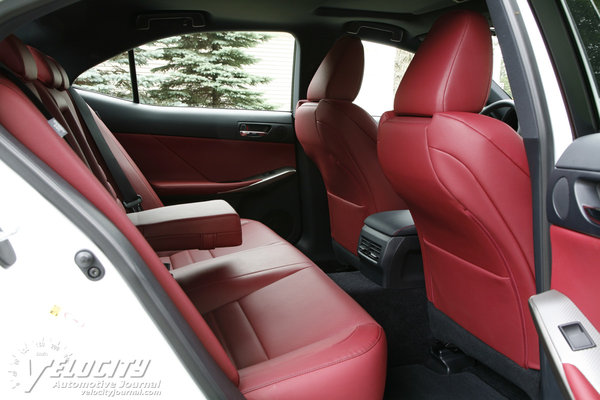 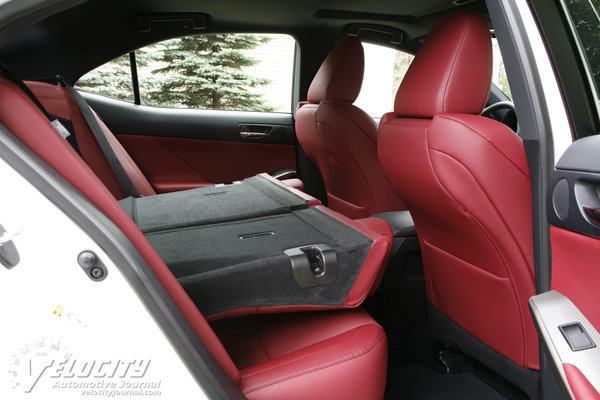 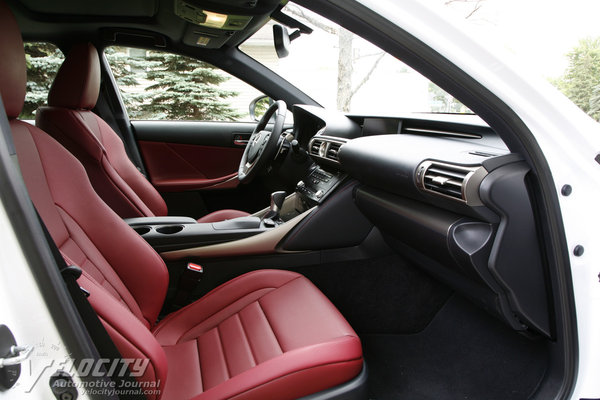 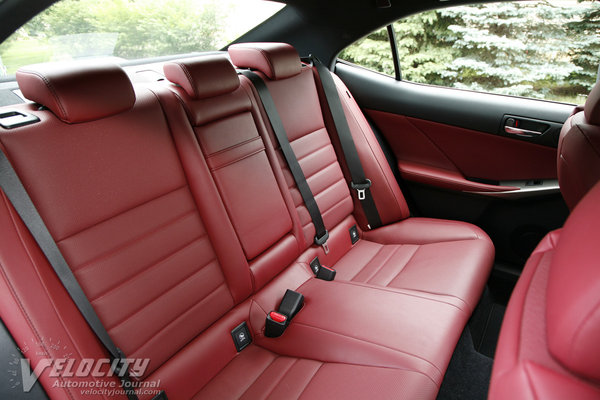 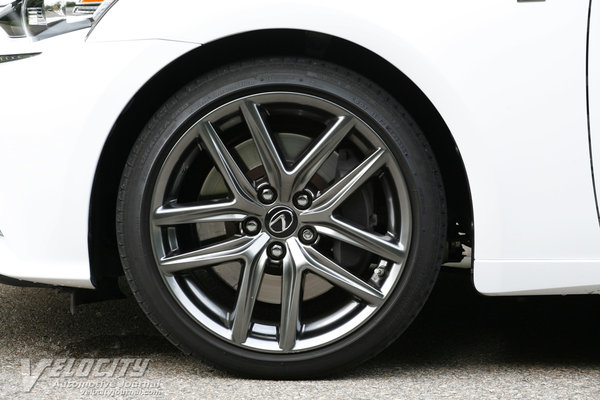