Hyundai has steadily marched upscale over the past few years. Above its mainstream Sonata midsize sedan, Hyundai introduced the XG300/350, followed by the Azera. Neither of these entry luxury sedans made significant inroads in this competitive market segment. The new Genesis is a complete departure from its predecessors. Positioned above the Azera, which remains in the lineup, the Genesis is Hyundai's first credible attempt to take on the established Japanese and American luxury brands.

To compete in this crowded segment, Hyundai equipped the rear-wheel drive Genesis with V-6 and V-8 engines, spacious accommodations, and all the expected technology and luxury features. Although the Genesis is priced comparably with the Lexus ES350, Acura TL, Chrysler 300, and Cadillac CTS, Hyundai's benchmarks were the Mercedes-Benz E-Class, BMW 5-Series, Infiniti M, and Lexus GS. Lofty targets to be sure, but the Genesis may be close enough to these premium sedans to lure less brand-conscious customers.

The Genesis lineup starts at $32,250 for the V-6, or another $5K gets the V-8. Hyundai offers a choice of a 290-bhp 3.8L V-6 or a 375-bhp 4.6L V-8. Both engines are linked to a 6-speed automatic; the V-6 gets an Aisin unit, while the V-8 is equipped with a ZF transmission. Our test vehicles was a Genesis 4.6 equipped with the $4,000 Technology Package which includes a Lexicon audio system, rear backup camera, navigation system, HID headlights, sunroof, adaptive front lights, and a cooled driver's seat. Including the $750 freight and handling charge, the total sticker price was $42,000. The best value is undoubtedly the Genesis 3.8, equipped with the $2,000 Premium Package, which stickers at just $35,000 (including freight and handling).

Luxury sedans such as the Genesis are expected to coddle their occupants in soft leather, pleasing textures, and the latest technology. Our test vehicle had a taupe and beige interior, with dark wood veneer on the center console and shifter knob. The 8-way power adjustable driver's seat is heated and cooled via a rocker button on the center console; the front passenger isn't as fortunate, as the seat is limited to 4-way adjustability, and is heated only. Both front seats could benefit from more supportive thigh bolsters, but the perforated leather keeps occupants in place. Rear passengers have ample legroom and comfortable seats, but those taller than 6-ft. will brush up against the headliner.

Hyundai designed a commendably uncluttered instrument panel: the cluster consists of an electroluminescent 8,000 RPM tachometer, 160-MPH speedometer, and smaller coolant and fuel level gauges. A center display screen shows transmission mode, odometer, and other vehicle system information. On the steering wheel spokes are buttons for audio, cruise, Bluetooth phone, and trip computer. At the top of the center stack is a multi-function LCD for the navigation and audio systems, as well as the rearview camera; arrayed below are buttons for the climate control system. A slot-loading CD/DVD changer and the audio volume knob are tucked underneath the curving center stack. Most audio and navigation functions are controlled by a multi-function knob and surrounding buttons on the center console. Unlike other navigation system displays, the Genesis does not have a touchscreen, but we didn't really miss it. Hyundai offers two Lexicon audio systems on the Genesis; our test vehicle had the upgraded 17-speaker/11-channel Lexicon surround sound system (included with the Technology Package), which should amaze most audiophiles with its stunning clarity.

Hyundai touts the 4.6L V-8 as the most powerful engine in its class, and with 375-bhp @ 6,500 RPM and 333 lb.-ft. @ 3,500 RPM (running on premium fuel), the all-aluminum DOHC V-8 with CVVT (Continuously Variable Valve Timing) certainly backs up the claim; running on regular unleaded, peak output drops to 368-bhp and 324 lb.-ft. Throttle response is linear throughout the rev range up to the 6,500 RPM power peak. The V-8 is remarkably quiet, except at full throttle, when the subdued hammering of the eight pistons and valvetrain becomes audible. EPA fuel consumption ratings for the V-8 are 17/25 MPG (city/hwy.); we averaged 23 MPG on the highway and 20 MPG in urban driving. The smaller 3.8L V-6 achieves 18/27 MPG (city/hwy.), according the EPA.

Mated to the 4.6L V-8 is a 6-speed ZF automatic that shifts nearly seamlessly, regardless of throttle position. Aside from a large gap between first and second gears, the remaining five ratios of the 6HP26 transmission are closely spaced; 5th and 6th gears are overdrive. Although the 3.133:1 final drive ratio is designed for optimal fuel efficiency, the short 4:171:1 first gear ratio compensates for the tall final drive. With ample low-RPM torque from the V-8, the Genesis delivers strong acceleration from rest; Hyundai claim 0-60 MPH in 5.7 seconds. Manual shift control (SHIFTRONIC, according to Hyundai) for the ZF automatic is available by sliding the gear lever to the right of the "D" setting into a separate shift gate, although we rarely needed to do so.

The Genesis has a typical rack-and-pinion steering system, with engine-RPM sensitive power assist. The electro-hydraulic power steering, specific to the V-8 Genesis filtered out most road textures, but wasn't too isolated to provide adequate feedback. We considered steering effort to be too light, but similar to other luxury sedans. The steering damps out kickback, which reduces driver fatigue on long road trips.

Instead of the typical MacPherson struts, Hyundai adopted a sophisticated 5-link front and rear suspension with gas shock absorbers all around. At front is a 25-mm diameter anti-roll bar, with an 18-mm diameter anti-roll bar on the rear axle. Genesis V-6 models are equipped with 12.6" diameter vented disc brakes in front and 12.4" diameter solid discs at the rear; the heavier V-8 gets 13.0" diameter front discs and identical rear brakes. ABS, traction control, and Electronic Stability Control (ESC) are standard. Braking performance was acceptable, but pedal feel was slightly spongy.

Hyundai's suspension tuning favors a compliant ride, yet body motions are kept in check by tight damping. Despite its competent handling and solid flex-free chassis, at just over two tons (4,012 lbs.), the Genesis 4.6 is best suited to covering vast stretches of interstate highway, as opposed to tackling switchback mountain roads. However, our handling assessment is affected by the non-standard Bridgestone Blizzak LM25V tires which were on our test vehicle (a wise choice during winter in Detroit). Unsurprisingly, the Bridgestones are optimized for snow and slush, so dry weather traction and steering response will not compare favorably to the original equipment P235/50R18 tires. Despite the substitution of the aggressive winter tires, the Genesis was exceptionally quiet at highway speeds with minimal engine or wind noise.

Japanese, American, and German manufacturers have had the entry luxury market to themselves, but Hyundai's Genesis should be warning that the Koreans plan to siphon off customers from the established players. While most premium brands focus on cutting-edge technology, styling, and brand image to distinguish themselves, Hyundai emphasized comfort, class-leading horsepower, and above average fuel economy. The Genesis is not a sport sedan, and makes no real pretense as such, because its target customers are actually traditional Cadillac, Lexus, Buick, and Lincoln owners who prefer luxury without an inflated sticker price. Currently, Hyundai lacks the name recognition of its more established competitors, but we think the Genesis deserves serious consideration for any customers who hold value for money above brand cachet. 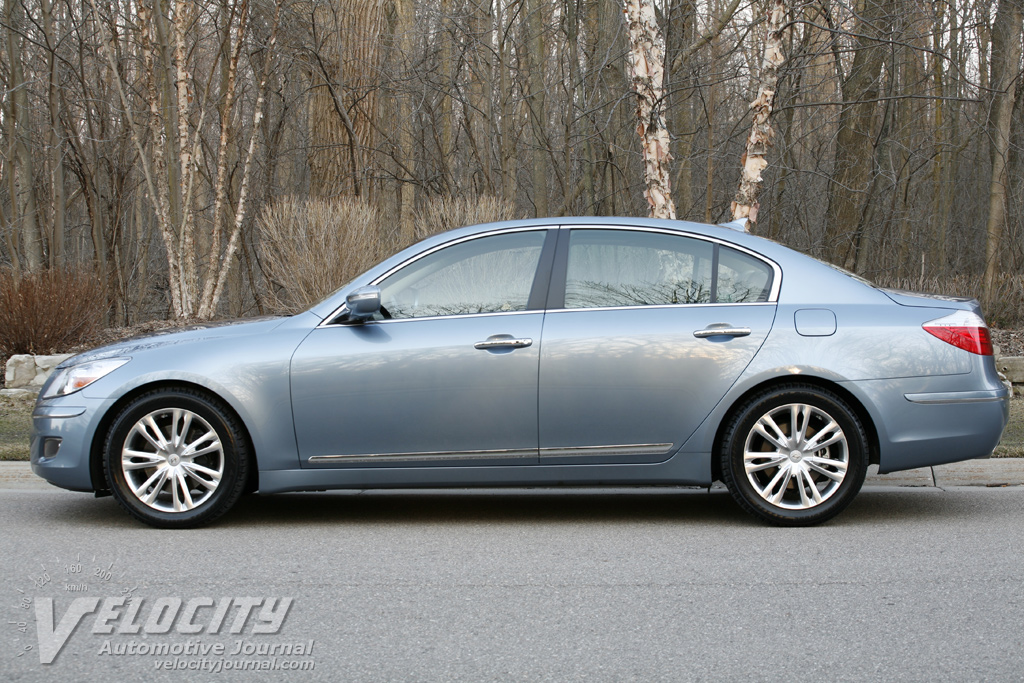 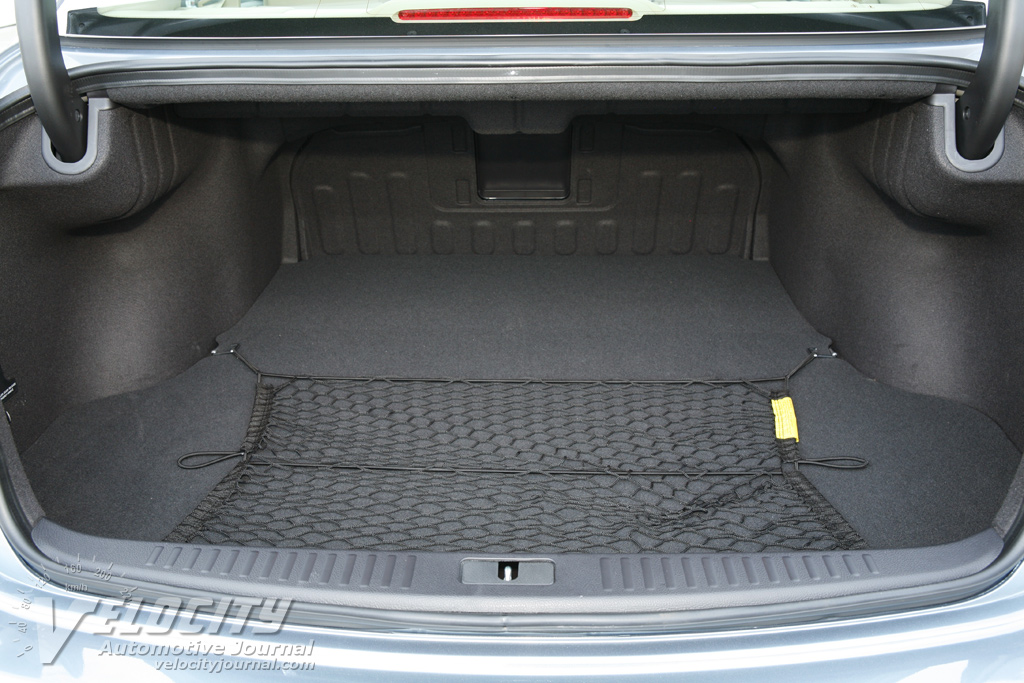 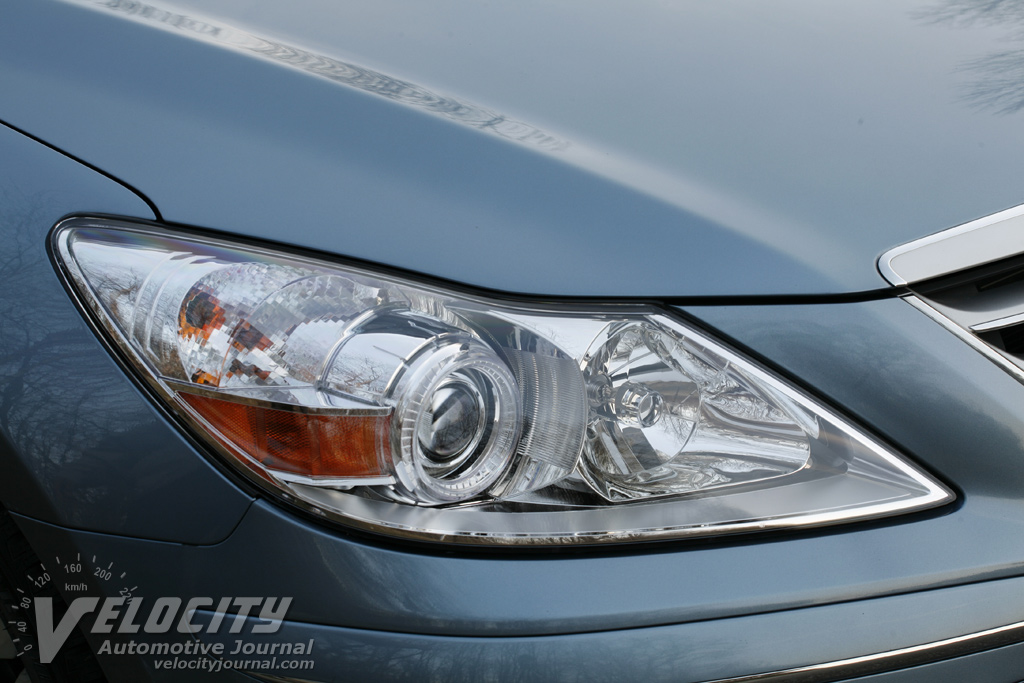 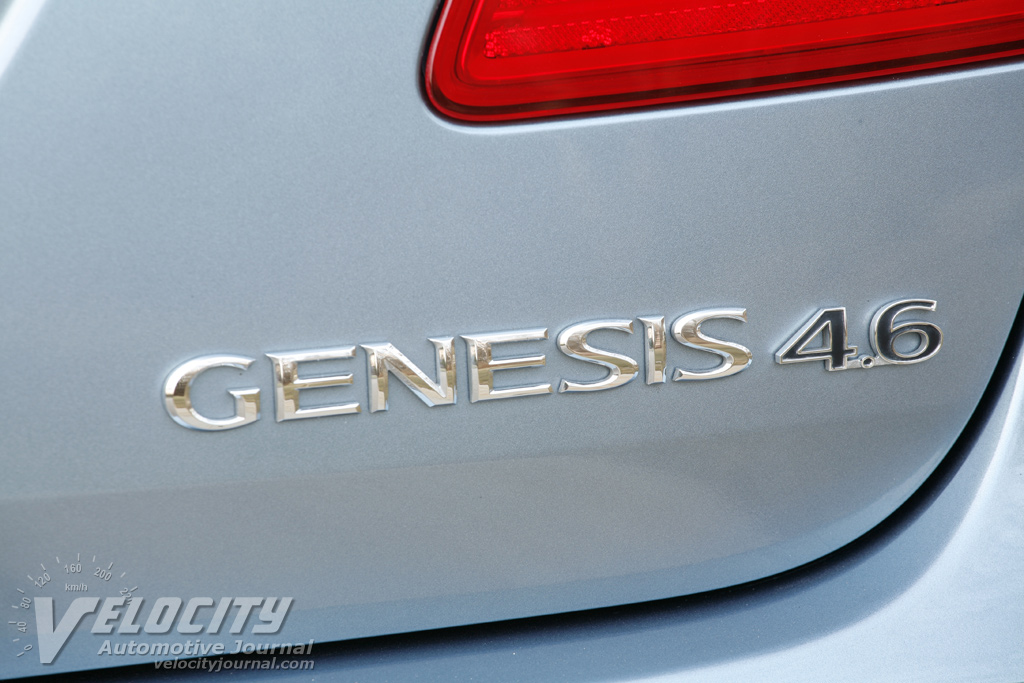 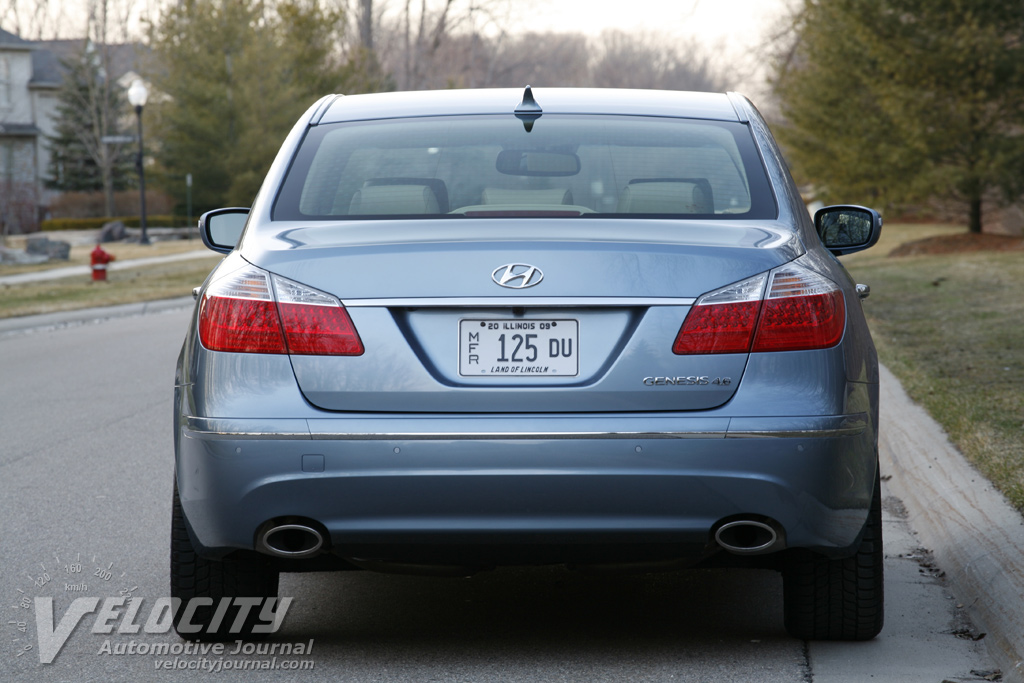 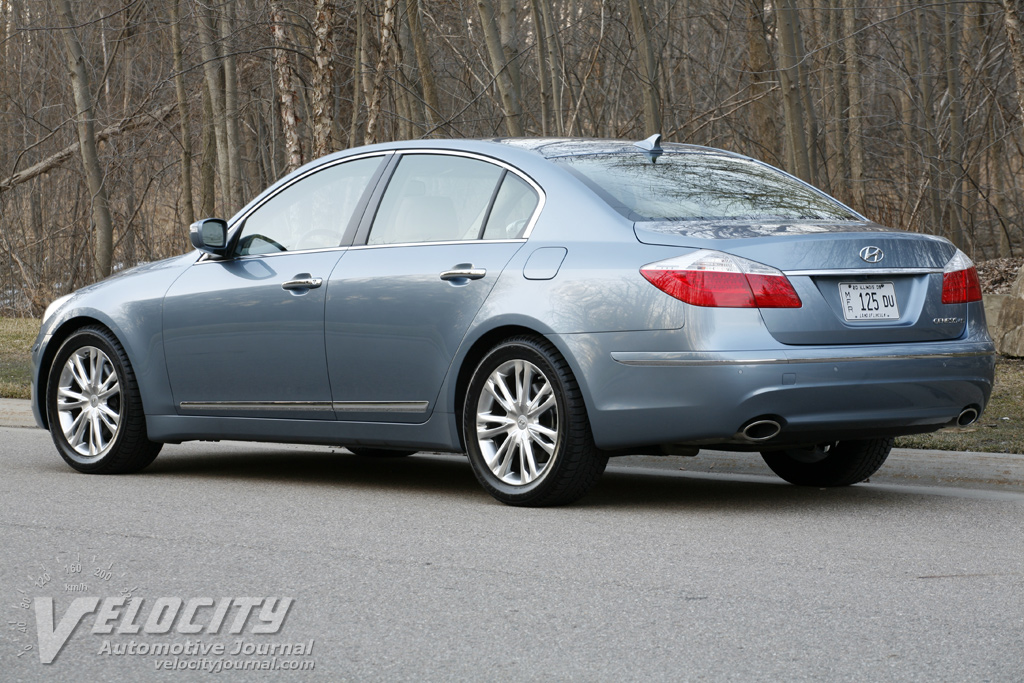 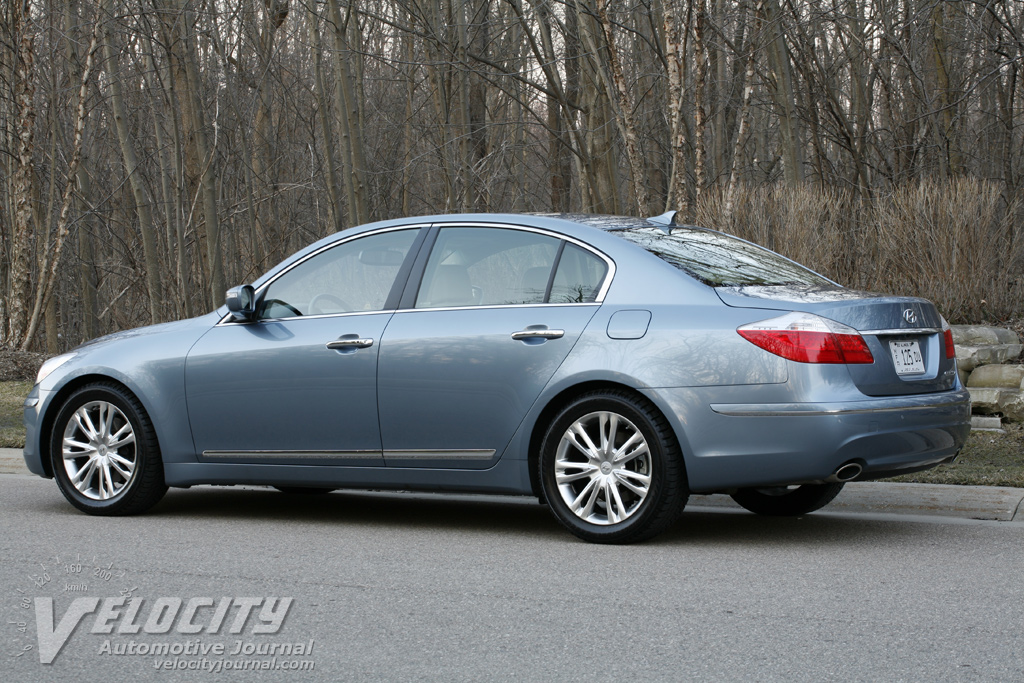 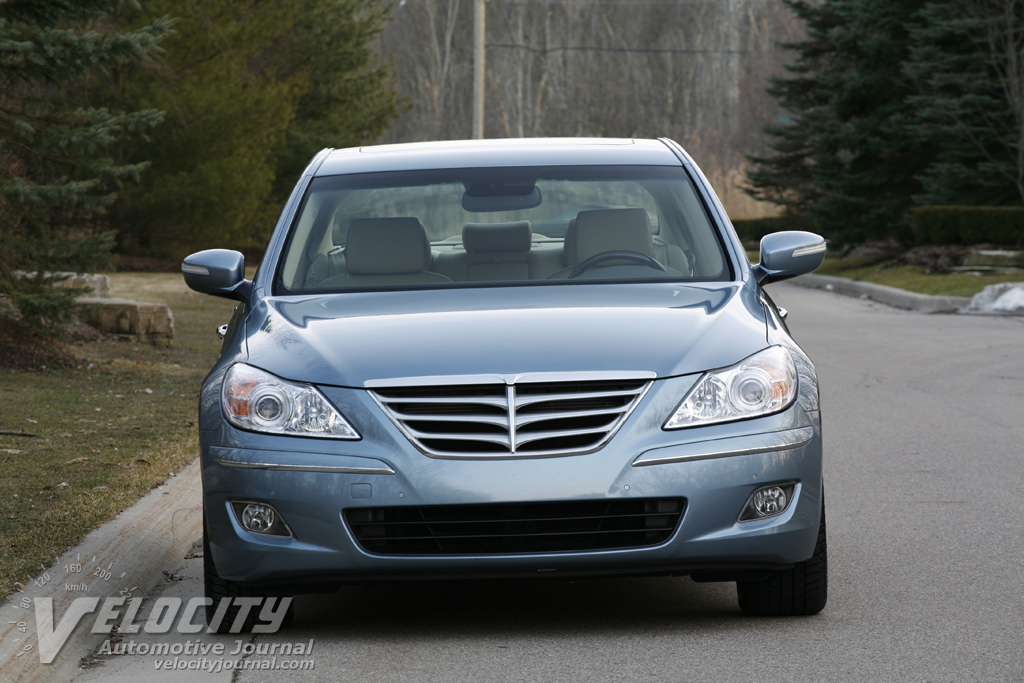 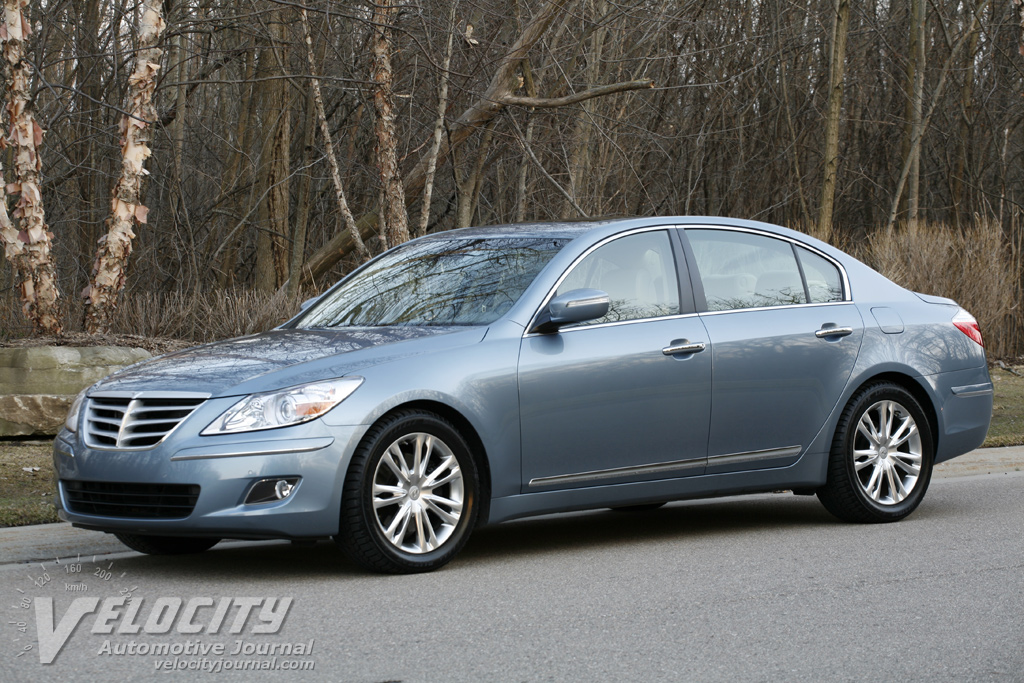 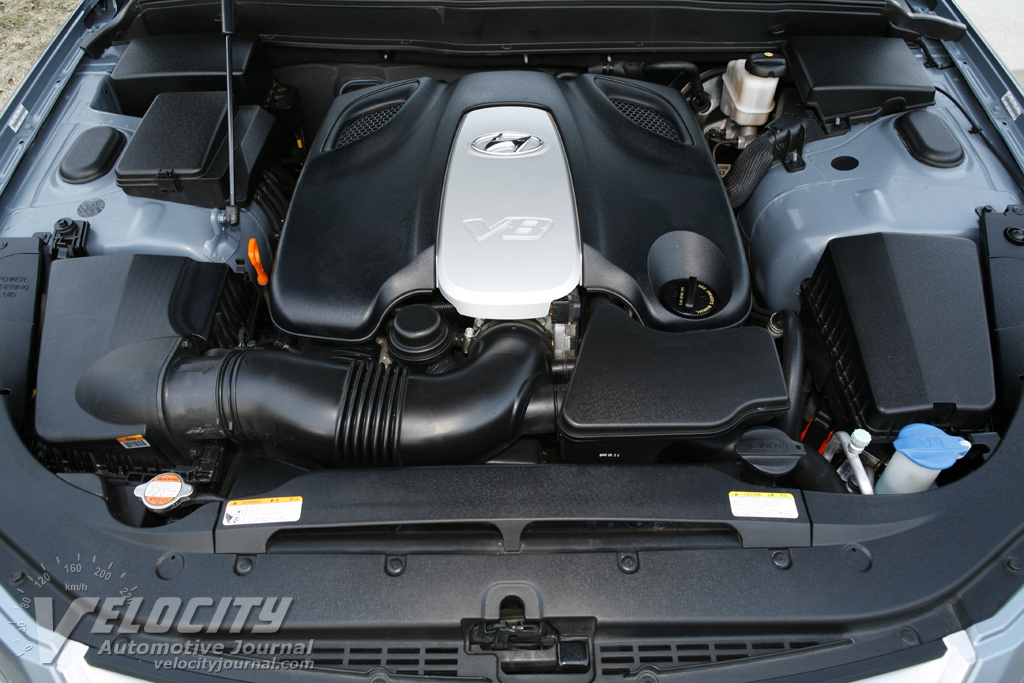 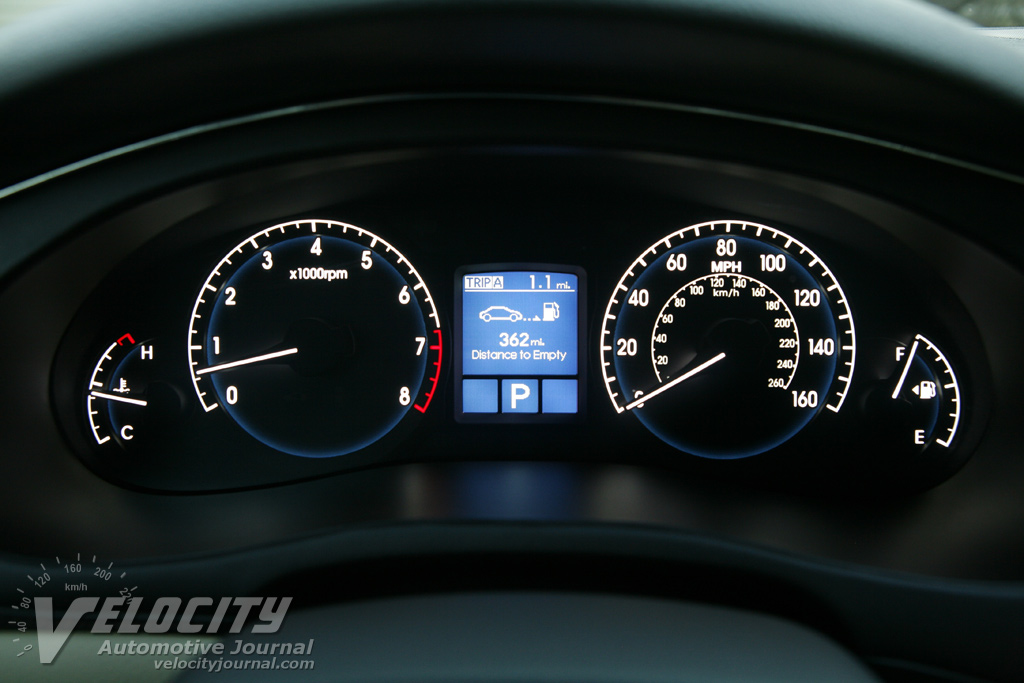 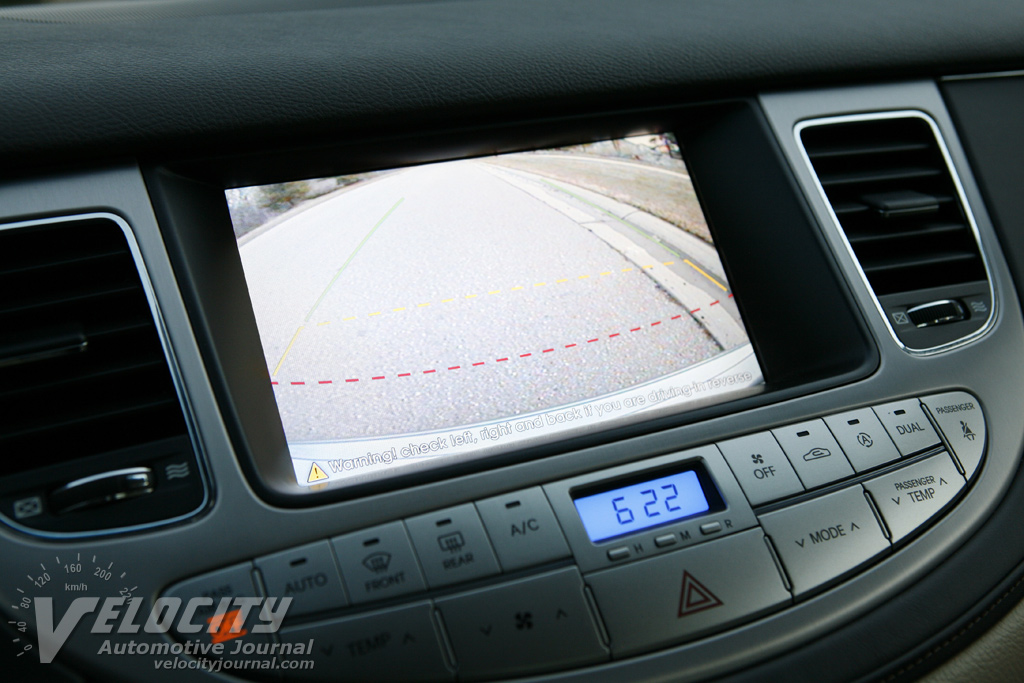 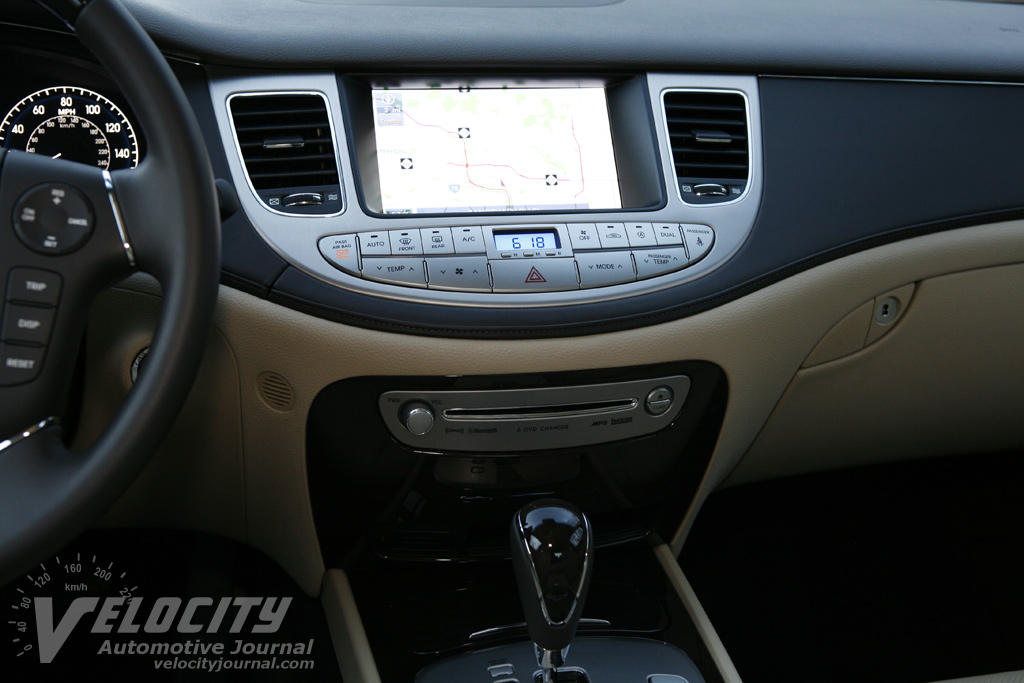 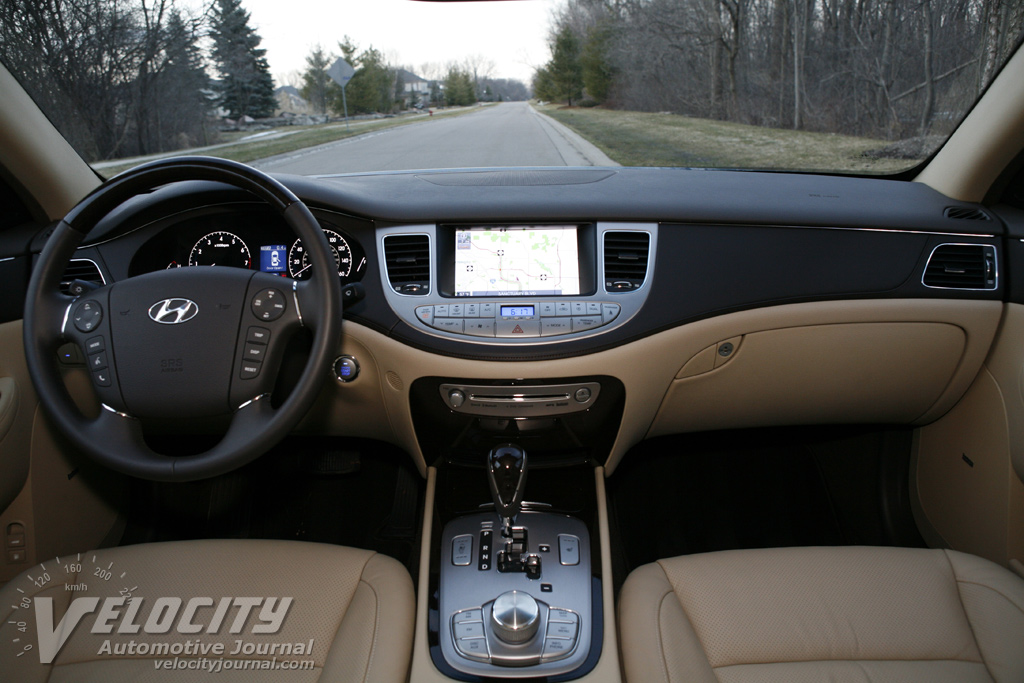 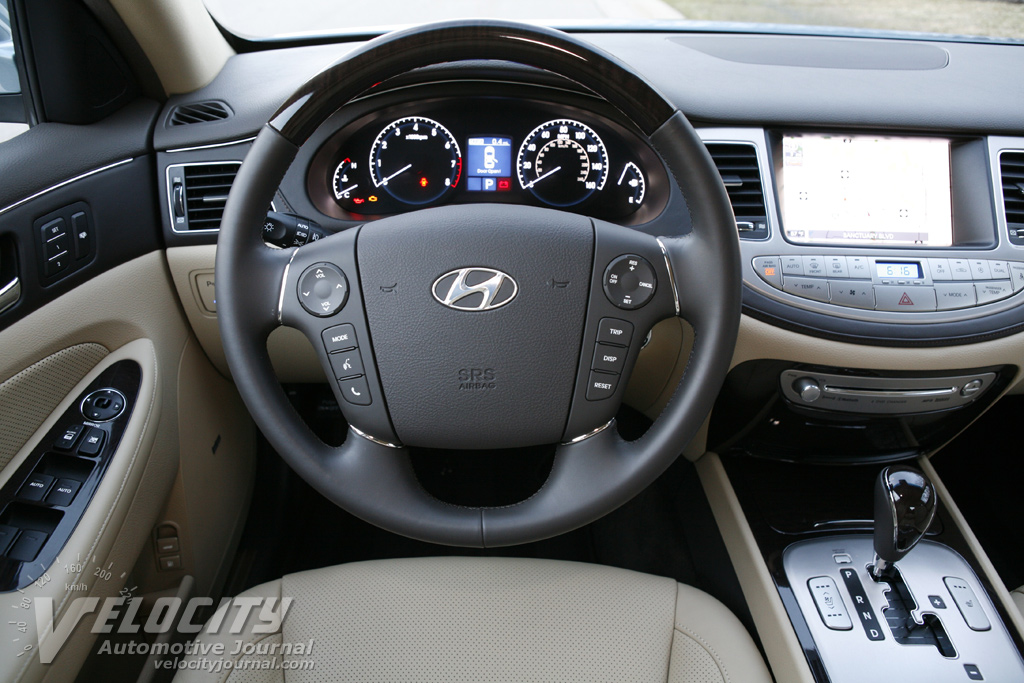 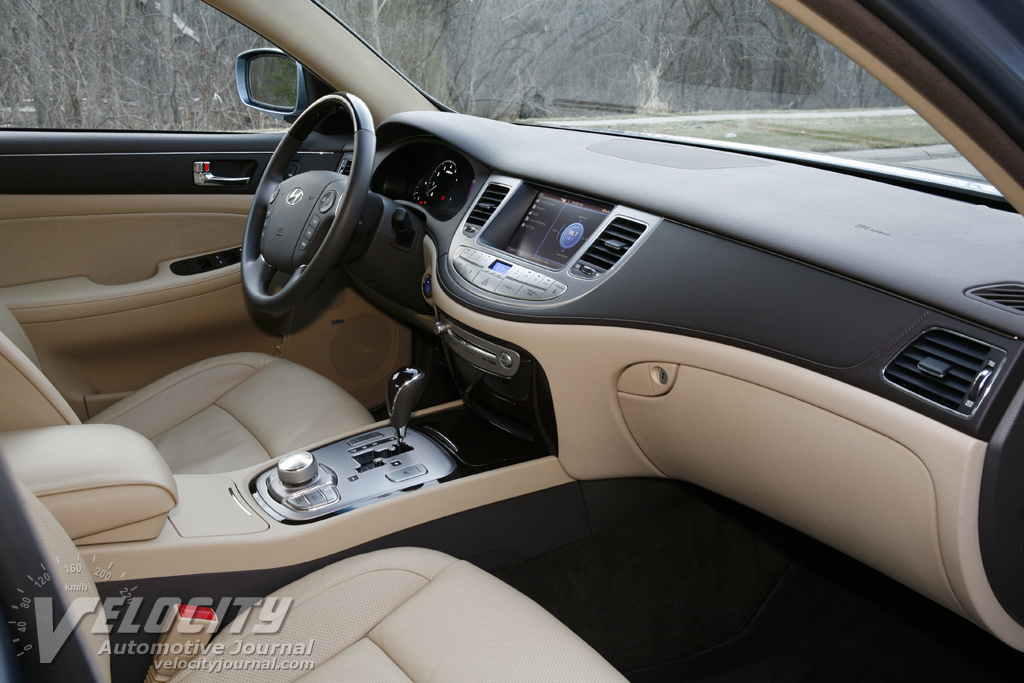 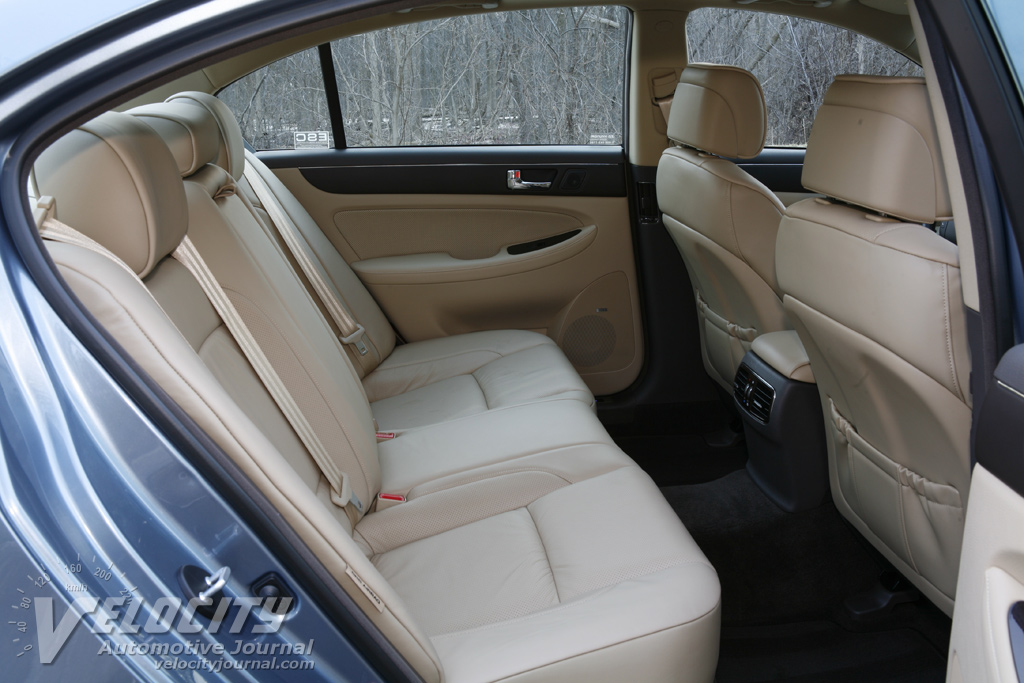 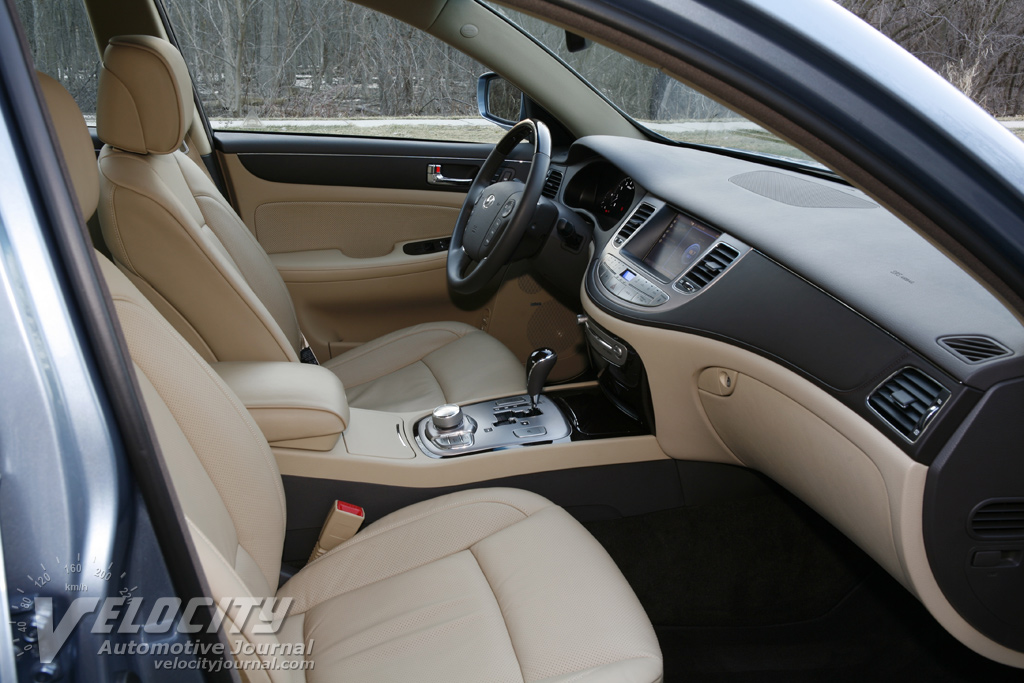 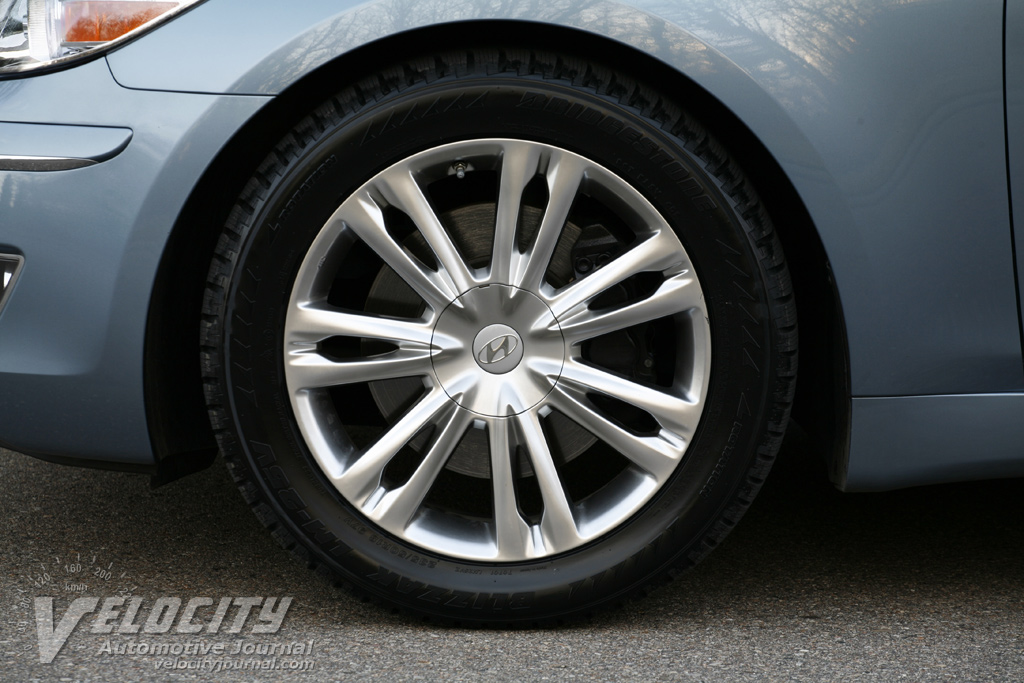